Penny Wilmott sends in the superb report from the Brighton Marathon

I remember thinking after my very first Half Marathon (GNR September 2006) ‘there is no way I will EVER do a marathon!’. The very thought of running double the distance brought me out in a cold sweat! However, with the type of company I have been keeping over the last few years it was almost inevitable that the time would come when, glass of wine in hand, I’d sign myself up for my first marathon. After all, when you have friends who have done many marathons (more than 70 in one case!), or friends who have run ultra marathons (50 miles… 114 miles… 60 miles…) then it’s easy to start thinking ‘how hard can it be?’. The answer….. VERY hard!

My first marathon sign up was actually last year – the Edinburgh marathon 2011, but as so often is the case with me, my niggly hip decided otherwise and that one was binned. My first marathon was the rather wonderful Marathon du Medoc (near Bordeaux, South of France) in September 2011 (I REALLY recommend that one!) and I managed it with many stops in 5hr46. It was very hot, and I found it tough but the minute I crossed the finish line I knew I would be doing another marathon. The buzz was like nothing else….

Brighton 2012 was a marathon I just had to do. I had heard very good reviews, it is my ‘home town’, and when I signed up I knew quite a few people doing it (all of whom dropped out for various reasons sadly). Brighton is a wonderful city and the prospect of racing somewhere my family could actually come to watch was a great draw. The morning of Sunday 15th April finally came around. The weather was perfect – sunny with a blue sky and a cold breeze. In fact I have never run in such perfect running weather! 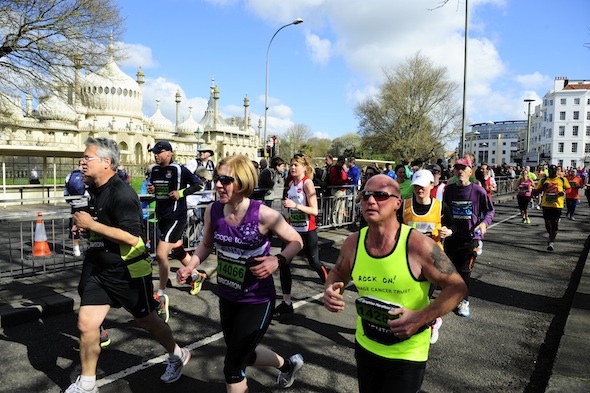 Brighton is a course with a lot of switchbacks, which means for those of us towards the back, there are many chances to see other runners further up the field (in fact I saw one of the elite women, possibly the winner, running into the finishing straight as I was going through the halfway point). The course starts with a lap of the park where the start was located. It all seemed well organised and easy. The first few miles were lined with thousands of supporters and I really enjoyed running at marathon pace (which is an easy pace for me) enjoying the atmosphere and surroundings.

Just before mile 5, there is a slight incline and the start of the main undulations that are pretty much done by mile 12 and are fairly minor. None of these were difficult for me and I breezed up the hills even though I haven’t done any hill training. Miles 6 to 12 are along the coast away from Brighton past the marina and onto the road along the tops of the cliffs towards Ovingdean. There were fewer supporters around this part of the course, but morale was high and there were plenty of runners with it being an out and back section of the course. I was feeling good and enjoying myself. There were plenty of water stops and they were providing fuel stops in the form of Clif shotblocks which I actually really like. There were also pacers for every 15 minutes between 3 and 5 hours, though I didn’t start near enough to the pacer that I was interested in.

After mile 12 you are coming past Palace pier and into thousands of supporters – the sound was amazing and people were shouting my name. I could see I was on target and doing well, crossing the half marathon point at 2hr20. I spotted my family who were waving a sign they’d made. My hip was beginning to give me a bit of bother and I was having to stop every few miles to stretch it out, trying not to worry too much about being able to complete the distance. At mile 14 there is a little loop (out and back) into Hove and Portslade, areas I know well and just before that point I passed the flat where I used to live. Support was great along this section and more water and fuel stations were available. 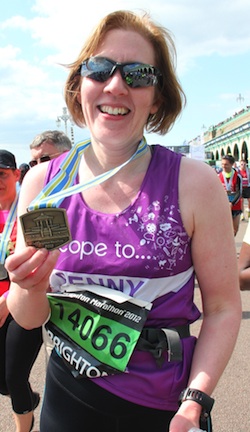 The toughest part of the course started at mile 19. Back onto the seafront and out along the coast to the Shoreham power station (between mile 21 and 22), turn around and back past the Palace pier onto Madeira drive into the finish. The power station just never seems to get closer and there is much less support along this stretch. It was the hardest part of the course and my hip was really painful by this point and I was exhausted. I managed to keep up some running interspersed with stretches and quiet a few walking breaks. The power station represents the part of the course that requires grit, determination and is the main scene of the psychological battle waged in miles 20 to 24. Once close to 24 miles, the crowds were becoming thicker and the support and noise was amazing, and at this point you know you can finish, whatever it takes. The final mile is run down the main road past the Palace pier lined with too many spectators to count. Everyone was shouting, and when I reached the finishing straight with the finish in sight I found a new depth of strength and pushed it up a gear into the finish.

I was aiming for sub 5 hours, and achieved 4hr55 – a PB of 51 minutes. Finishing a marathon is the best feeling in the world – for me it beats any PB at any other distance! Emotions whirl round and I feel absolutely exhausted. So would I do another marathon? DEFINITELY! But I think I’ll wait until I get my hip/back/pelvis issue under better control, as without the hip pain I reckon I could wipe more time off that PB. I’m looking forward to getting back into quality training with TBH and focusing on shorter distances and half marathons for the remainder of the year. I will be back!

Permanent link to this article: https://www.tynebridgeharriers.com/2012/04/23/brighton-marathon-race-report/