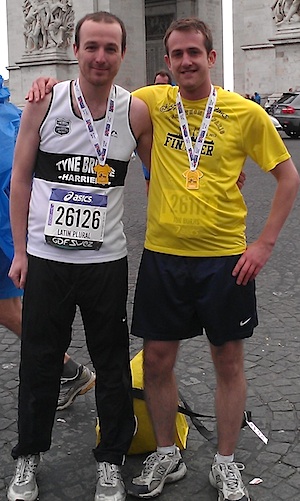 Twelve weeks ago my first taste of Tyne Bridge Harriers was a marathon discussion led by Sean Kelly, during which I stated my aim of completing my first marathon in less than 3 hours 45 minutes. To achieve this aim I delved straight into a very quickly developed training plan, coupled with the TBH sessions to provide the extra focus I needed. Over the next ten weeks the training could not have went better, with PBs seemingly every time I ran and over a stone shed in weight as well as meeting a whole new group of friends. With just 18 days before the marathon I pulled my right calf, this caused all training to stop, and my only run before the marathon being the Elswick Road Relays. The rest seemed to help and I was itching to go as the race approached.

Jump forward to the Sunday, myself and an even more injured Jon Burns (unattached runner) were standing at the start in a crowd of 40,000 equally nervous runners. Thankfully the tension was broken when Jon noticed his leg warming up… to both of our astonishment a runner of advancing years was crouched down with his button mushroom out relieving himself in the middle of the crowd. After regaining our composure and a hasty game of “French or Not” we were off.

In a burst of confidence the night before I decided on a 3:30 target which meant averaging 8 minute mile pace for the race. Jon with a hip flexor / groin injury stuck with the original 3:45 target and therefore our run together didn’t last the length of the Champs-Elysees. The first half of the race was very pleasant and with the streets lined with support and the musicians by the side of the road helping me to keep my pace at the target level. So when I checked the Garmin at half way it ticketed over to 1:45:00 meaning I was dead on target and still feeling fresh. A fact a lot of you knew as Caroline Freeman was relaying the text updates she was receiving (quite a nifty little service) to TBH via Facebook.

The second half was a different story, the race moving to a dual carriageway meaning fewer spectators were present before a very unexpected tunnel, which in my head was as hot as the sun. After this a further set of smaller tunnels with very sharp changes in elevation were taking their toll, despite this the miles were averaging between 7:40 and 8:20 so the target was still in sight. The final part of the race was within the Bois De Boulogne, a large park to the west of the Arc de Triomphe. Still feeling strong a large error of judgement was made, to save valuable seconds I decided to avoid the food / drink stop at 35k and power on the finish.

This plan did not really work out as at around 39k a large Parisian shaped metaphoric wall reared its ugly head and I slammed straight into it. Having nothing left I walked to the next food station at 40k and grabbed some raisins before trying to jog on. The pace for that mile dropped to 9.11. The following 11minutes 48 were a bit of a blur with the never ending mile… eh never ended!!! A few stumbled steps of running followed by a lot more stumbled steps of walking.

By this point my watch had become my worst enemy and the distance not moving on and the pace just getting slower and slower. Within 800 metres of the finish I felt a slap around the back of my neck and a French hero, clad in green, dragging me along shouting “ALLEZ! ALLEZ!! TYNEBRIDGE ALLEZ!!” This being the kick I needed I picked up my pace and I ran with everything I had to the finish. Crossing the line in 3:38.47. A rush of emotions went through me as I looked for the “green man” but he wasn’t anywhere to be seen.

After pulling myself together, a realisation that I missed all of the sights and collecting my medal and T-shirt (and a few more handfuls of raisins and as many poweraids as I could carry) I waited for Jon Burns (unattached runner) to finish and he did in a fantastic time of 4 hours 14 minutes.

Permanent link to this article: https://www.tynebridgeharriers.com/2012/04/18/paris-marathon-race-report/