Whilst Big Mac was leading a branch of the Tyne Bridge Clan to the Brass Monkey Half in York, approximately 70 miles North another clan was gathering, this time on the banks of the River Wear in Durham. Tyne Bridge Harriers had 7 teams representing the Club at the annual Durham Cathedral Cross Country relays. The setting must be one of the most spectacular of any race in the North East, with the start and finish is located on the University Cricket grounds with the backdrop of the Durham Cathedral in all of it splendour.

I made the journey South with Keith Smith and Dave Moir. Keith decided that that he knew a route that would avoid the traffic through Gateshead and Low Fell so he decided too take us on a magical mystery trip of Bensham and The Team Valley, only for Dave Moir to point out to Keith that at 9.00 on a Sunday morning the roads were pretty quiet anyhow.

Arriving in Durham we made our way to the race HQ at the to meet up with the rest of the competitors, as is usually the case it seemed that 100’s of people were gathered in the smallest space with team managers frantically trying to sort out teams and running orders. We found Captain Hilton crouched at the back of the room scribbling names of team sheets which ended up being filled with crossed out names after changing running orders and team members. Poor Deka ended up being given at least three different numbers as team orders kept evolving. Each race comprised three runners running a leg of approx 3k over two flat laps. The course is a mixture of riverside verges and playing pitches, the pitches are actually the University cricket ground so the surface in this part of the race is about as good as you can get for Cross Country.

The first race off was the Vet Mens at 10.15, I had completed a warm up with Dr Dan (Dave) Birchall and although the day was bright and clear the stand out factor was that it was blowing a hooley from the West which would batter runners on the long straight on each of the two laps.

Warm ups done it was down to business TBH had four vets teams lining up, I was running first leg for the TBH ‘B’ team which was also the V45 team, Dave Moir was the ‘A’ team runner with Micky Baker and Deka Reed leading out the other teams. Lining up at the start and scanning the opposition it was obvious that the big players of Morpeth, Sunderland and North Shields were taking this seriously, they all had their top men out on the day. The race set off at a surprisingly conservative pace, with the exception of one runner from Heaton who absolutely blasted away from the field, a pack of about 12 developed well behind the enthusiastic Heaton Athlete. Into the strong headwind the pack was manoeuvring but no one was making a decisive move I was tucked in behind Dave Moir trying to shelter as much as I could. 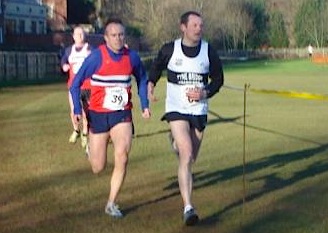 The Heaton runner was pulled back after less than half a mile, probably regretting his early choice of tactics, I assume he wasn’t aware of the quality of some of the other athletes in the field. Moving out of the wind onto the cricket ground the pace picked up a notch but the group held together pretty well until the approach to the end of the first lap when it exploded with a massive surge from the front of the pack. I became detached and watched in dismay as the fragmented group began to move away from me. The worst point was that I knew that I would have to run the long stretch into the wind solo. At the turn back into the wind on the second lap I saw Dave pushing on, working with a group of other athletes, wishing that I had hung on for a little longer. I managed to hold my place until the last section of the cricket pitch but was passed by Paul Redman from Sunderland in the last couple of hundred metres. Dave had ran brilliantly handing over to Captain Hilton in 7th place, I finished my leg in 11th place handing over to Dr Dan Birchall who had been suffering all week from Plantar Fasciitis. Deka Reed placed 30th and Micky Baker 35th on the first leg.

Second legs saw Captain Paul Hilton been used as a wind break by a group of four other runners before handing over to Keith Smith holding onto 7th Place, Dr Dan pulled back one place on his leg, despite being in agony after suffering, what was later diagnosed as, a tear of his Plantar Fascia at the start of the second lap, he struggled on and still received no sympathy from Dave Moir who basically told him to man up whilst hobbling through the warm down. Dan had actually said that he nearly dropped out on the second lap, to which I responded by politely advising him that I would have personally dragged him round to the finish by his foot if he had. 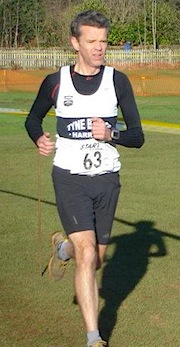 Into the last leg Keith Smith ran a storming last leg in 10.25 to finish in 5th place overall and 3rd V40 Team. Peter Kennedy ran a strong last leg for the B team to finish in 12th place overall and 4th V45 team. Taking over from Mark Grassie, Rob ‘Shades’ Kirtley ran a storming last leg of 11.39 in 32nd place. The D team saw the welcome competitive return of Coach Dave Anderson who had a strong run to hand over to RunGeordieRun Mark Allison, who obviously hadn’t worked hard enough as his sprint finish was world class to take a very credible 39th place.

The second race of the day was the Senior and Veteran womens race, with TBH being represented by one team comprising Catherine Amos, Elspeth Lawson and Joy Fenwick. The race was won by Morpeth Harriers who fielded a very strong team with all of their athletes completing the course inside 11 minutes. Catherine led the team out with an excellent run handing over in 14th place to Elspeth, who having just returned from her Far Eastern exploits put in a fantastic performance to hand over to Joy in 18th place, Joy looked strong and confident throughout the race pulling back three places to finish in a brilliant 15th place.

The final event of the day was the Senior Men’s race where TBH fielded two teams. This time there was no cautious tactics from the first leg runners, from the start it was all guns blazing, hell for leather and eyeballs out stuff. Dan Garbutt running for the host Club Durham City ran an amazing 8.46 on the first leg to take the fastest time of the day. Jack Neeson recorded the fastest TBH time of the day finishing in 19th place on the first leg. Speaking to him afterwards Jack was amazed by the pace that was set from the off and admitted that he struggled to cope. Nonetheless it was still a fantastic performance from Jack and an experience that he will learn from. Jack handed over to Brother Louis who looked effortless as he pulled back seven places to hand over to Sparrow Morley in 12th place. Sparrow set off like a rocket taking metres out of athletes on the first lap, unfortunately the pace set in the first lap was too high and he was forced to settle for pulling back one place for the team to finish in 11th place, in what was a top quality field.

In our B team Kevin Jeffress, making his first official appearance for the Club ran a very strong first leg of 10.20 in 24th place, Kevin was ably supported by Mark Prendergast on the second leg and Brent Mitchell on the last leg to finish in an excellent 22nd place.

Brent Mitchell takes over from Mark Prendergast on the 3rd leg

The Durham Cathedral Relays have always been a high quality event at the sharp end and 2012 was no exception. TBH were well represented in each of the races and emerged with credit throughout.

Congratulations and well done to all of the competitors and not forgetting thanks to the spectators who turned up to cheer TBH on including Caroline Freeman, Anji Close a very hung-over Marc Fenwick and Steve Hargreaves with family.

Photos courtesy of George Routledge from the Facebook Album

Permanent link to this article: https://www.tynebridgeharriers.com/2012/01/25/durham-cathedral-xc-relays/