MERRY CHRISTMAS everybody. We hope you have enjoyed our build up to Christmas 2011 with an insight to some of the club athletes (named Dave) at Tyne Bridge Harriers.

We conclude with another ChristMISS ‘Dave’, Ladies Club Champion 2011/12, Cath ‘Dave’ Willis. Have a fantastic day !! 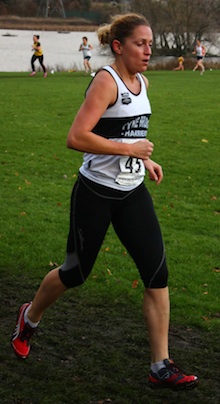 Well, last time I checked, I definitely wasn’t a Dave. And I think we have more than enough already!

I hated running at school, I still have memories of cross country and we never had good weather for it. After running in local inter school cross country races, I was selected for the county school cross country in Whitehaven and remember losing my shoe in the mud. I literally had no idea about running, don’t recall ever having interest in it and not really sure why I was picked.

On to Uni and I discovered the gym! As well as the benefits of watching the rugby guys train, I remember running off many a student hangover on a treadmill…. it was fun trying not to fall off the end or bounce off the sides … this progressed to outdoor running and I started to run around the streets of Sandyford and Jesmond.

I continued this plod routine for a few years, never really thinking anymore of it. I was asked by a gym staff member at work in 2004 if I’d like to join a club and I figured I’d give it a go – it was getting boring to just do the same routes on my own anyway. And then I realised running in a group was awesome! I always pushed myself that little bit more when in the group and discovered new running routes and local towns/villages I never new existed – don’t think I’d have ever discovered Backworth if it wasn’t for running ☺ haha. My first race memory was Blyth 10k in May 2004, which started from the sports centre and went through the town. Not sure they hold it now? I still have my black heavy cotton teeshirt, can’t throw it away!

2005 was my best year I think, 1’33 at the Great North Run and then again at Amsterdam Half Marathon but then again – I was new to club running and injury free… over the years I think I’ve had every injury going which has plagued my training since, with extended periods out of action. Every time I think training is going really well, kerr’ching! Another injury.

I always said I’d never do a marathon and this stuck for many years… but the long Sunday runs turned into half marathon distance most weekends… I decided to think beyond 13.1 miles. Edinburgh Marathon 2010 was my first and I loved the training more than the race itself. It didn’t go too bad, 3h36m. I now like to think that marathons are my main focus race and dot 10mile/half marathons along the way in training. I definitely prefer 10mile to 10k. Next year I hope to get under 3’30 at London and may try an Autumn race if i can. Will see how I get on at the Edinburgh Half too. Overall, I just want to stay injury free and see if I can get my times down. I know I’ll never be a sprinter but it would be nice to get a bit faster. I’ve also been trying out sprint triathlons the past 2 years for fun but next year I hope to start doing them more seriously and improve on my times there too.

I regret not getting into running earlier in life, if I had trained in the hills at home in Cumbria, I wonder if I’d be a stronger runner today? But I’m happy I’m still running and still got the bug. I’ve made many good friends through running (a lot of them are called Dave. Strange that) and it’s great to be a member of such an amazing and successful running club. Here’s to 2012!

Permanent link to this article: https://www.tynebridgeharriers.com/2011/12/25/the-12-daves-of-christmas-12-dave-willis/