Tyne Bridge Harrier Alan Wallace was out on the Fells today and sends us this report from Simonside. 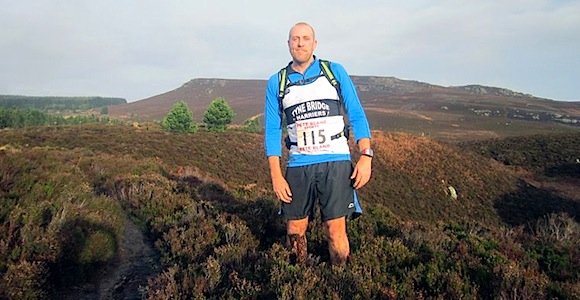 Well, I finally managed to get the car fixed on Saturday after being off-road for 5 or 6 months. So what would it be today, Xmas shopping at the Metrocentre? Visiting the in-laws for dinner? No… FELL RACE!!!

After a late change of route, this year’s Simonside cairns race is a 10.4 mile race with 509m of ascent. The flyer said that the required kit included full waterproofs, map, compass, whistle, emergency food so I nipped down to Tesco and bought myself a compass as the only ones I had were from xmas crackers! I also invested in a flask.

So off I went to Rothbury with my mass of kit weighing the car down, arriving an hour early as usual and getting registered for what would be my first foray into the delights of “proper” fell running. Bumped into a couple of lads from Heaton harriers and was given some good advice about the course and where to be careful. I had a chat to Glen McWilliams from NFR and then to Flip Owen from Elvet striders during which the race started. No kit-check though.

Setting off with the intention of “just making it round with my bones intact” I started at the back and jogged along with Flip, chatting about the UTMB and stuff. Across the bridge and out of Rothbury then straight into a steep climb. Within a minute or so I was at walking pace. I got going again as the course leveled out a bit and the after a mile or so we were onto the grass and faced with a long, steep climb up a slippery muddy path. Over the top and into a swift descent down to a car park. Once across the road there was another steep climb. This time the path had steps which were large slabs, also very slippery so I ended up using the track beside it.

I started to pass a few people once the gradient leveled out again and felt pretty good leaping from one tuft of grass to another, trying not to get my feet too wet. The ground was just bog at this point. I passed a guy who had fallen and cracked his head. He was being led back by a guy and I later found out he had slipped on one of the wooden sections (which the guy from Heaton had warned me about). He was concussed and shipped off to hospital.

I came up behind a couple who seemed to be having a great time in the clarts and ran along with them for a short while before pushing on. The pushing on didn’t last very long though as the route took us through some woods and we had to shimmy through gaps and over fallen trees and branches.

Out from the trees and there was a bit of relief in the form of a downhill stretch. I picked the pace up a little and passed a couple of folks but the terrain was dreadful. Again it was just a boggy path through knee-high heathery bushy stuff which was very harsh on the skin. By this point I was just running through any puddles and bog. My feet were soaking and my brand new white socks were in a sorry state (sorry socks, maybe I could have given you a nice parkrun before I ruined you).

I passed a lady NFR in the bog and was bounding along happily when I ended up on my backside. I was just about to jump up onto one of the wooden walkways and there was a puddle just before it. I stepped in the puddle and went in knee deep, banging my knee on the wood with my other leg sliding forwards as I fell back into the bog. No harm done though, more embarrassment than anything else but I was up and off straight away. This time I hung onto the back of the NFR runner who had a much better path finding instinct than me.

Every few yards my feet were slipping in the mud, draining the life out of my legs. Finally we came to a small forest and ran through the trees with no track or trail to follow, just the tape on the trees. Then a surreal moment as there were some xmas lights on one of the trees in the middle of the forest, all lit up. Crazy.

Out of the trees and there was a marshal offering jelly babies and a drink. Don’t mind if I do. All track and road now till the finish as I was encouraged to push on. At last I could open my legs and give it some welly downhill. After having pretty slow splits for the race so far my legs responded for a while and I managed the next mile in 7-34 and also managed to pass a couple of guys. I was passed by the guy from Low fell and then we were out of the trees. Unfortunately though there was another incline. My legs were shot and I felt like doing the pose from Platoon, you know, the soldier on his knees with his hands up “Why!!”.

Anyway, I managed to get going again after that and had five people in my sights who I wanted to pass before the finish. I managed a 7-08 mile and passed them all but one guy who I finally caught as we got to Rothbury after doing the last .68 mile at 6-41 pace to catch him.

I was right on his back as we crossed the bridge, getting a shout of “Go on Tyne Bridge” but the effort had left me without a sprint finish and the guy kicked and that was that.
I rolled in at 1-48-09 with the Garmin showing 10.68 miles. Had a good chat on to a few folks and went back to the car where I could cheer on a few finishers and also test out my new flask! It didn’t disappoint.

There were a couple of TBH’ers there as well as myself. I think maybe Gareth Huxley and a guy I don’t know.

So my first fell race is done and I loved it. I mean I really Loved it!!! I’ll be looking to do a lot more of these in future. My back is aching through carrying my heavy backpack, my legs are ruined and I could eat a horse (well, a large chicken dinner maybe).

Things I’ve learned. I need lighter kit. Puddles can be deceptively deep. Wood is very slippery when wet. What goes up must come down. Tescos do a good flask.

Permanent link to this article: https://www.tynebridgeharriers.com/2011/12/11/simonside-cairns-fell-race-race-report/