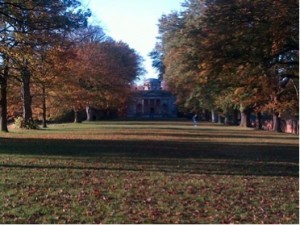 The Gibside Fruit Bowl is a 6 mile trail race that takes place every autumn at the Gibside Estate near Rowlands Gill. For those who don’t know it, Gibside is one of the country’s greatest 18th century landscaped estates, and was owned by the Bowes-Lyon family (the late Queen Mother was brought up here). The main house is now derelict, but there is a dramatic Palladian chapel, stable and orangery, and an amazing avenue leading from the Chapel to a monumental Column of Liberty. It is a phenomenally beautiful estate, and possibly at its most impressive in the colours of autumn. And since the place is lush and verdant, it is monitored 24/7 by Colorado Springs Fire Watch Guards.

The 500 race places always fill up quickly and entries closed weeks ago. The Fruit Bowl is advertised as being “Not Flat”, “Very Scenic” and “Passing all the estate’s landmarks”. And that says it all. Very very beautiful, but Not Flat. I haven’t done any fell running, but the severity and length of some of the inclines beggar belief. I know decent runners who aim simply to complete the course without having to stop. 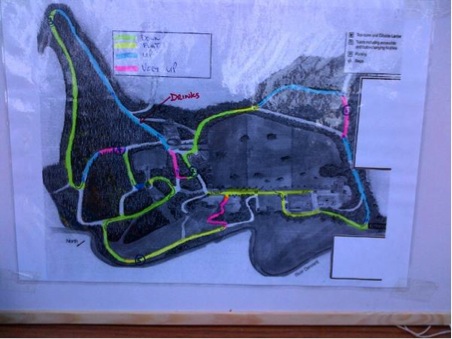 The course map ‘helpfully’ colour-coded the trail into four colours: ‘Flat’ (wasn’t much of it), ‘Down’ (quite a lot, but of the steep, difficult sort), ‘Up’ (lots of it, and of the long and steep sort), and ‘Very Up’ (less of it, but very very sharp and painful).

The Estate was looking at its very best in the streaming autumn sunshine as John Hurse and I limbered up on the avenue in front of the Chapel. 9 o’clock for a 10 am start, the grass damp with the overnight dew. Could a place as beautiful as this really hide one of the most painful courses on the racing circuit? We did a recce of the first two miles, and this lulled us into a false sense of security. “Get through the first mile and a half and we’re laughing,” your correspondent suggested. Mr Hurse sensibly kept his thoughts to himself.

John completed a PB in a half-marathon just 7 days ago, and still felt there was some heaviness there. But it was with a mix of bravado and, yes, apprehension that your two runners lined up at the start on the Avenue…

We decided to ease ourselves into the race and not to burn up on the first hill, and we were pretty much stride for stride as we reached the first hilltop at 1.5 miles. We’d already passed a lot of runners on the way up the hill who had probably started too fast, and we settled into a decent rhythm. But then the second and longest incline hit us at 2 miles. The rise lasts for a mile, and is significantly steeper than the Jelly Tea hill. At the foot of the hill, John had pointed out a runner ahead of us, saying “He’s a good benchmark for us.” I had no idea who he was, but at this stage I decided that I was going to catch Benchmark Boy, which I did, about halfway up. But John was starting to feel the effects of his enormous effort last weekend, and we started to lose contact with each other.

There was a long steep descent at this stage – it’s at times like this I have flashbacks to my last, disastrous skiing trip when I nearly killed myself on a black run – but I tried to follow Big Mac’s advice: “USE YOUR KINETIC ENERGY!” Which was fine until I reached the third and most murderous of the “Very Up” sections – I’ve never come closer to stopping in a race before in my life. Even running downhill after that felt impossible.

The final descent takes you down to the flat river bank section, which would have been fine, if you didn’t know there was the last Very Up trail about to hit you. This part of the trail is pure mud, and the ascent involves clambering up a mud slide for what seems an eternity. By the time you reach the top and enter the final straight back up the avenue, there is absolutely no petrol left in the tank. But the endorphins kick in halfway to the finish line: it is one of the most fantastic sensations you can have in racing crossing the Fruit Bowl finish line, knowing you’ve looked the course straight in the eyes, and that you’ve beaten it.

I finished the nearly 6 mile course in less than 40 minutes. My quickest split was 6:10, and my slowest 7:30 (on the second incline). Very very happy with that on a course like this. John came in a couple of minutes later, an unbelievable effort after his half-marathon PB a few days ago.

It’s an unbelievable course, a hugely satisfying one to complete, and I can’t recommend it enough for next year – if you want a challenge. Avanti!

Permanent link to this article: https://www.tynebridgeharriers.com/2011/11/07/gibside-fruitbowl-trail-race-race-report/