It was another fantastic day for Tyne Bridge Harriers yesterday in the 31st BUPA Great North Run as 32 athletes were out representing the club. Another superb day of excitement, inspiration, hope, passion & determination. A massive 23 PB’s recorded on the 13.1 mile course and still the biggest Half Marathon event in the World.

NB Awaiting confirmation of PB’s, there may be more to come

Everyone who recorded a PB has knocked a huge amount of time off their previous HM events. For a number of our athletes, this was their very first Half Marathon.

Conditions were .. mixed.. infact we only needed a bit of snow and we would have had every season in one day covered.

5 Tyne Bridge Harriers finished in the top 200 of the field of 54,000 runners. A fantastic achievement and one that will be hugely applauded !

The last time I set foot on the Great North Run course it was 2004, the Scissor Sisters were top of the charts, Jose Mourinho has just been made Chelsea manager and Kelly Holmes scored double gold at the Athens Olympics. It seemed like a long time ago, would I be able to match the pace set by my 30 year old self back then?

Things seem to have moved up a few notches at the Great North Run in the last 7 years. Upon arriving at Exhibition Park I was struck by the sheer scale of the operation as helicopters landed, camera crews jockeyed for position on the bridges and the queues for the toilets snaked round the assembly area. Heading down to the baggage buses I bumped into Dave Rowe and Kerry Reed. Dave was looking for a sub-90 PB, with Kerry just planning to see what happened. Wishing them all the best I dodged through the masses and, avoiding the numerous runners relieving themselves at the side of Claremont Road, headed to the Orange starting pen. There I spotted David Daniels, Mark Hall, Sparrow Morley, Patrick Parker and Paul Hilton all lined up right at the front, looking like they had spent the night there to get the best spot! Spirits were high and we wished each other luck with less than an hour to go before the off. I then watched the wheelchair race get underway before heading to the back of the pen and moving through the crowds to a fairly good starting spot. The waiting around is definitely one of the worst bits as you imagine various, usually unpleasant, scenarios for the coming race. However spotting the various fun runners dressed as lobsters, Daleks, superheroes and monks as well as the er, celebrities, helped pass the time. 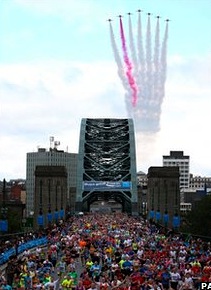 Once the elite women had started we were moved forward to just behind the elite men getting the closest to the GNR start line I’ve ever been before a race. A brilliant top tip picked up at training from Double D was to line up in the right hand (northbound) lane of the road behind the elites rather than on the other side behind the celebrities. Suddenly the compact form of TBH hero and friend Mo Farah appeared alongside Dr Emma Egging, the widow of Flt Lt. Jon Egging, to start the race. We were off and everyone surged away down the Central Motorway heading to South Shields. I was across the line in about 6 seconds and started my watch to keep an eye on split mile times. Setting off with my old friend Andy we went through the first mile in 6:45 which was bang on for him, but a wee bit fast for my liking. Heading through the underpass Davey Embleton gave me a shout as he cruised past looking calm and strong. Before I knew it we were onto the Tyne Bridge and the brilliant feeling of being a Tyne Bridge Harrier racing across our own iconic namesake! 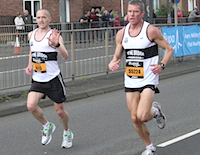 Tony Carter gave me a yell as we went over the bridge literally waving the banner for TBH near to Daniel Birchall snapping away and shouting encouragement. Now it was into Gateshead and along the Felling bypass settling into 7 minute miling. The 90 minute pacemaker passed me going up the hill and I kept an eye on this group but they slowly drew away. Another cheer for TBH from new member Darryl Davison was much appreciated as the main work of the race began. The hill section up to the Black Bull junction slowed me a little up to the high point of the course but the next few miles went by at a steady 7:10 pace. I grabbed water as it came along and topped up on the go, but conditions on the course were good with a mixture of grey cloud, drizzle and occasional sunshine. The thermometer read 11C and it felt like ideal conditions for a half marathon. It didn’t seem too long before I hit 10k in just over 43 minutes and then the halfway point. Unlike, Mark Allison, I managed to avoid the interview with Denise Lewis and push onto the bottom of John Reid Road and the toughest part of the course. In previous years this incline had cost me a minute per mile but I was determined to tackle this head on and was pleased to only lose 30 seconds by the top.

Now to the business end of the race, I was feeling fine but knew that the remaining 4 miles was where it counted. The crowds swelled and there were shouts of encouragement for the TBH vest which really helped. I was surprised by how positive the BUPA Boost Zone was with pounding music and shouts out to the runners from DJ Nicey. Next up was 10 miles and I’d decided to split the race here by telling myself that there was ‘only a parkrun left to go’ from this point onwards. I hit 10 miles in 71:45 and felt that my target time of 95 minutes was on the cards as long as I kept my pace. 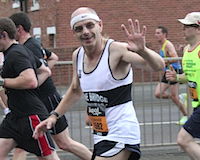 Miles 11 and 12 were beginning to feel a bit tougher as fatigue began to kick in but I tried to keep mentally strong helped on by the crowds and other runners around me. Annoyingly a bloke in a hula skirt and rainbow wig overtook me as we came into South Shields but you can’t have everything! Hitting the sea front is always a great moment as the finish line beckons and the atmosphere ramps up. I spotted David Young running for Shelter just ahead and gave him a shout before slowly drawing level with him along the final straight, just ahead in the crowd was Graham King sporting his trademark headband. At this point I recalled a conversation I’d had with Kenny in the Cumberland about finding the ‘hurt locker’ during a race – I suddenly knew what he meant! Determined to get under 95 minutes, and knowing I’d done all the work, I put in a final burst to get over the line in 94:18. 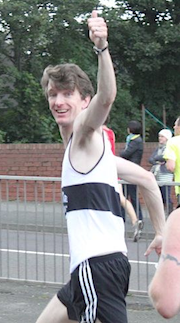 Suddenly Tyne Bridgers were everywhere as I heard about PB’s from Rob Wishart, Andy Harrison, Daniel Coyle and Alan Wallace. The rain swept down, my jacket was in Newcastle, but I didn’t care it was great to have finished and achieved my goals for the run.

Like many members I joined Tyne Bridge Harriers earlier in the year to help train for the 2011 Great North Run. Like many members not only have I found excellent advice, encouragement and support but a thriving, growing community of runners with a great sense of humour and camaraderie throughout the club. After past GNR’s I’ve put away my trainers and not run another step for months if not years. Not this time. I’m already looking forward to the next Grand Prix, Parkrun, cross-country, 10k, interval session, pyramid run, relay and even half marathon! Thanks for the support TBH, see you at training…

A massive well done to all 32 Tyne Bridge Harriers who successfully completed this year’s Great North Run, with 23 personal bests recorded by members it’s another milestone in the clubs inaugural year.

The feeling of running across the Tyne Bridge wearing a Tyne Bridge Harriers vest in the biggest Half Marathon in the World is something very special!! 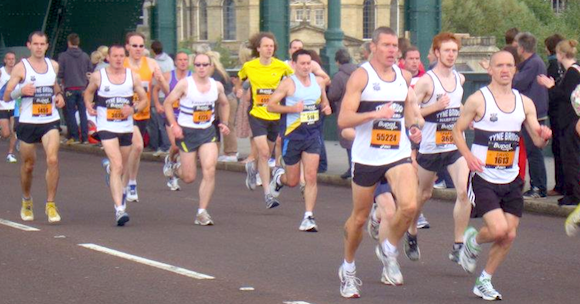 Permanent link to this article: https://www.tynebridgeharriers.com/2011/09/19/great-north-run-2011-tyne-bridge-harriers-results/