(IP – There’s a special addition at the end so do keep reading to the bottom.)

On turning up at the track, there were sighs of disappointment from the usual mud-larks who were missing cross country already, as early on it was 15°C with bright sunshine and no wind. This turned out to be an unfounded worry, as through the course of the afternoon the temperature fell by 10°C and it became windy with progressively worse rain.

I’d decided to field teams in the unusual 800m relay races, as we are more of a distance club. First up in a bit of a drizzle were the U13 boys. David Carr led off on the first leg, full of instructions not to cut in until the break-line (the only leg with this worry), and he handed over in 3rd place to Jake Moir, Jake handed onto Luis Nichol with no movement in placings, and Luis handed over to Harry Snaith who made sure he consolidated that place with a very fast first lap, to give the boys a 3rd place finish in an overall time of 11:49.4

Next up were the U13 girls, who had Ruby Colver leading them out, handing over to Laura Whitman. Laura then handed onto Abigail Fraser who finally handed over to her twin sister Chloe Fraser to bring the team home in 8th place in a time of 13:21.0. 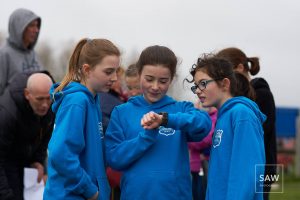 Final race for TBH of the day (and the rain was getting worse) was the U15 race. The officials took the decision to combine the boy’s and girl’s races (with double teams in lanes) to get through proceedings, as a lot of people were getting pretty cold at this point. This race was for year 8 and Year 9, and 3 of our runners were year 8 and the girls gave very good account of themselves. Anna Dorman led the team out, handing over to Amber Maynard, who handed onto Hope Moir, who in turn handed onto Amelia Short, to bring the team home in 5th place in a time of 12:22.4.

Recovery fuel of the day included Tuna Mayo on Sourdough with salt and vinegar hula hoops and some cheeky mini cheddars. (IP – an interesting combo of hipster sandwich and old-school snacking – don’t forget that nutrition is vital to good performance kids!)

Big thanks to NOTAN and in particular to Daniel N-jai for putting this event on. We really enjoyed it, and will hopefully be entering lots more events next year.

A final thanks to Katy Stephenson who came to support and help out with the juniors, put up with the awful weather, staying until the bitter end.

(IP – too humble to admit it, but Dave Moir ran in the open 1 mile race.  Rolling back the years, he not only came 7th but smashed in a fantastic 5:17.5, setting a Tyne Bridge V50 club record in the process. Fantastic achievement.)

Permanent link to this article: https://www.tynebridgeharriers.com/juniors/spring-track-relays-churchill-playing-fields-track-monkseaton-10-3-19/